Joe Biden is considering imposing stricter testing rules for international travel as the White House develops a strategy to prevent the spread of the Omicron coronavirus variant in the US.

A White House official said on Tuesday that Biden administration officials were evaluating a requirement that all incoming travellers obtain a negative Covid-19 test one day before their trip. That would mark a tightening of the timeline from the current rule, which mandates a test up to three days before departure.

The stricter testing rules are being debated ahead of a speech on Thursday in which Biden is expected to propose a plan to tackle a potential surge of Covid cases in the coming weeks.

Not only are US health officials concerned about the impact of an outbreak, but senior policymakers, including Jay Powell, chair of the Federal Reserve, and Janet Yellen, Treasury secretary, have warned of the risk it could pose to the economic recovery.

During a trip to Minnesota on Tuesday, Biden repeated that Americans should not “panic” about the new variant, which has not been detected in the US, but conceded they had reason to be worried about it.

“We’re going to fight this Covid this winter not with shutdowns and lockdowns, but with more widespread vaccinations, boosters, testing and much more,” the US president said.

“In the meantime, the best protection is getting fully vaccinated, getting a booster shot. I urge all Americans who haven’t yet to get that done. Get it done today,” Biden added.

During a briefing by White House health officials earlier in the day, Rochelle Walensky, director of the US Centers for Disease Control and Prevention, said the agency was examining “how to make international travel as safe as possible, including pre-departure testing closer to the time of flight, and considerations around additional post-arrival testing and self-quarantines”. 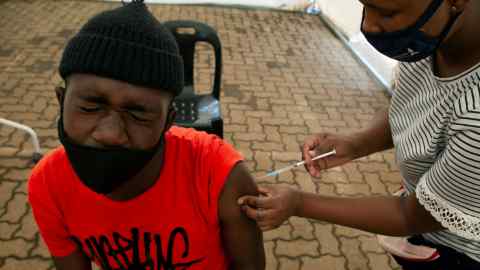 A spokesperson for CDC said: “A revised order would shorten the timeline for required testing for all international air travellers to one day before departure to the United States. This strengthens already robust protocols in place for international travel, including requirements for foreign travellers to be fully vaccinated.”

The agency is continuing to advise vaccinated passengers to get tested three to five days after arrival in the US, while unvaccinated Americans are recommended to quarantine for at least seven days.

The tougher testing rules for travellers to the US came in the wake of the Biden administration’s decision to impose new restrictions on those entering the country from a group of southern African countries, where the Omicron variant is experiencing its initial surge.

As recently as November 8, the US had lifted a sweeping travel ban imposed at the start of the pandemic which affected visitors from many European countries.

Biden vowed on Tuesday to co-ordinate with other governments if the US reimposes some restrictions. “Unlike [Donald] Trump I don’t shock our allies,” he said.

The Road to Recovery