Premier League stars are arriving in Cameroon for the Africa Cup of Nations as rebels step up their activity to disrupt the tournament in the troubled Central African country, bringing new warnings of violence against fans and players.

The UK government is advising against all but essential travel to two of the Afcon host cities, Limbe and Garoua, where 12 Premier League players are due to play, including Liverpool‘s Mo Salah, Manchester United starlet, Hannibal Mejbri and Arsenal‘s Omar Rekik and Mohamed Elneny.

There is also the possibility of attacks across the country, warn human rights groups. Even the British High Commission in the capital, Yaoundé, has been threatened. 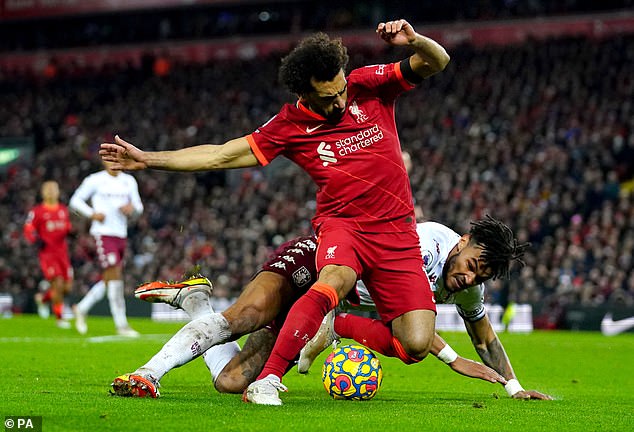 Liverpool’s Mohamed Salah is expected to play for Egypt in Garoua, Cameroon, during Afcon

But Garoua in the north and Limbe in the west of Cameroon, are considered by the UK government to be particular risks.

Meanwhile, in the south west, in Limbe, droves of armoured vehicles are patrolling the streets today, Reuters have reported, and checkpoints have been set up on major roads as Cameroon gears up for the tournament, which begins on Sunday.

Eighty explosive devices have been detonated in the west of Cameroon in the past year in a deepening conflict between the government in the French-speaking country and its English-speaking regions.

As reported by Sportsmail, even the Afcon mascot, Mola the lion, has had to wear a bullet-proof vest while touring a hotspot last month.

Top-flight stars are now flying to Central Africa as their countries finalise preparations.

Chelsea’s Edouard Mendy and Liverpool’s Sadio Mane were pictured on a private jet to join up with Senegal national team, immediately after they clashed at Stamford Bridge.

And the Reds’ Naby Keita was also seen boarding a private plane to join the Guinea squad, which is currently training in Rwanda.

Limbe’s Omnisport Stadium, which will host matches from Group F comprising Tunisia, Mali, Mauritania and Gambia and two round of 16 games, is the focus of significant concern.

The city is surrounded by a large no-go area, where the Foreign Office advises no British nationals should travel. The region is under a night-time curfew imposed by the local police.

Group F’s first game will be between Tunisia and Mali on January 12 and could feature Mejbri, 18, Rekik, 20, and Nottingham Forest’s Mohamed Drager for the north Africans and Brighton’s Yves Bissouma and Southampton’s Moussa Djenepo in the West African side. 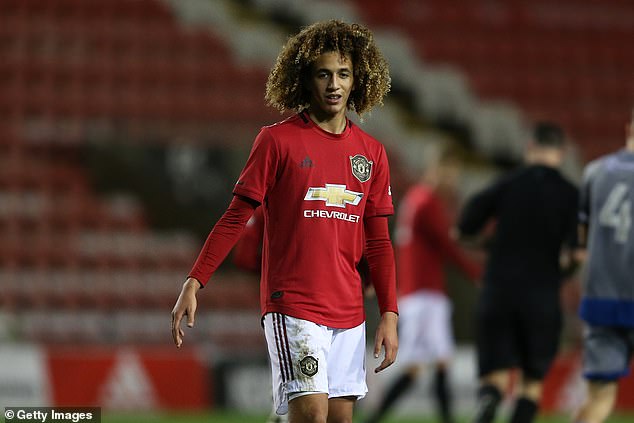 While Man United starlet Hannibal Mejbri has been selected for Tunisia, who play in Limbe

The nearby regional capital of Buea, where some Group F training will take place, was struck by two explosions in November including one in a university that wounded 11 students.

Limbe and the surrounding area is now at the centre of a large security operation.

The Cameroon authorities have insisted their measures will ensure the tournament goes off peacefully.

‘AFCON will take place in very good conditions. There are no grounds for concern,’ said Emmanuel Ledoux Engamba, senior official of Fako territory, which includes Limbe and Buea.

But the separatists in the so-called ‘anglophone zone’, have declared that they will impose ‘lockdowns, road barricades and ghost towns’ around Limbe before, during and after each of the eight fixtures scheduled for the Omnisport Stadium.

The rebels already enforce ‘ghost towns’ each Monday in the west of the country, often sparking violence. In November, a taxi driver was killed in an explosion in Buea, only 13 miles from the Afcon stadium, as part of the ‘ghost town’ campaign.

‘Violence and travel disruption is regularly reported [during ‘ghost town’ days]. You should be vigilant, monitor local media and avoid travelling within the region on such days.’

Human rights groups say they fear rebels will mount attacks to disrupt the tournament and players will be targeted.

‘[The rebels] are serious about attacks,’ said Rebecca Tinsley, a human rights researcher from the Cameroon Peace and Justice group. ‘And it’s not just in Limbe. It is a horrible situation.’

Tinsley believes the players at the tournament will be well protected, although she says the authorities will have to undertake a major security operation to ensure safety around hotels, restaurants, stadiums and travel to and from matches.

‘What worries us is that it will be bystanders and spectators who will suffer,’ she added. 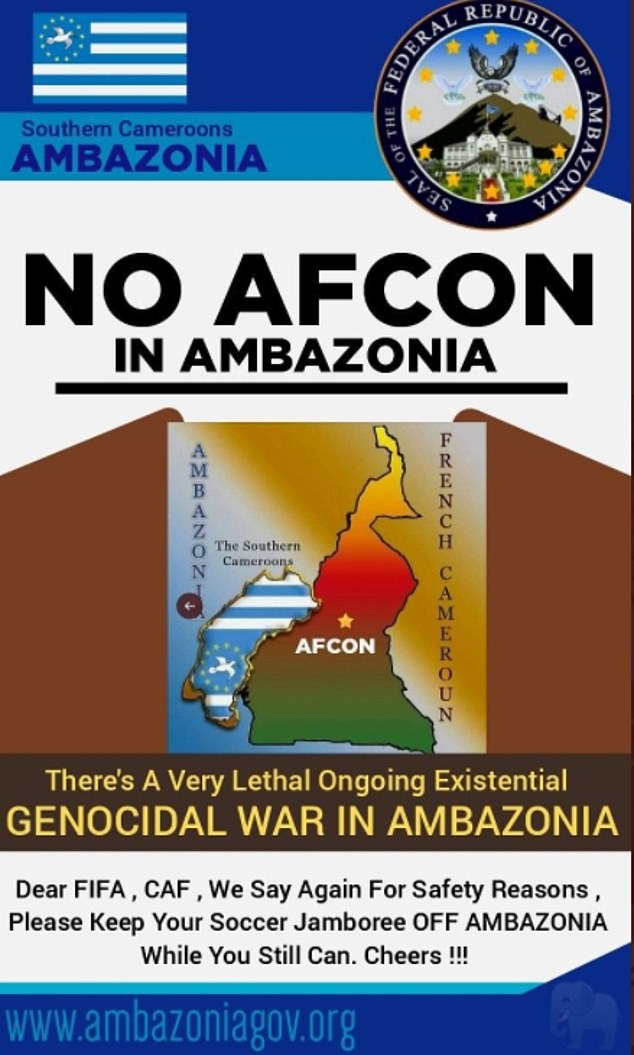 In a complex situation, the government of Cameroon is accused of abusing the human rights of citizens in anglophone areas where 750,000 people are believed to have fled their homes. At the same time, rebels attack the military and are accused of threatening and killing their own people to force them to support the cause.

It is estimated more than 3,000 people have died in violence from both sides in the last four years.

Host cities, Garoua and Limbe are subject to travel warnings

The complexity is compounded by the fact there are multiple rebel groups who don’t agree. Some have said they will not target teams at Afcon, while others have warned those teams playing in Limbe to stay away.

‘The Ambazonian Governing Council … warns of the damning effects liable to befall all football delegations and related officials if they chose to participate at the event,’ one faction was quoted as saying in local media.

The issue of security at Afcon has received little international attention.

The focus has been on the release date for players in Europe’s top five leagues and the risk posed by Covid. With the tournament due to start on Sunday, there has already been an outbreak of Covid, including four players affected in the host Cameroon squad.

However, Human Rights Watch has highlighted abuses and called for games in Limbe to be moved and Amnesty International has also published reports detailing horrific violence over recent years. 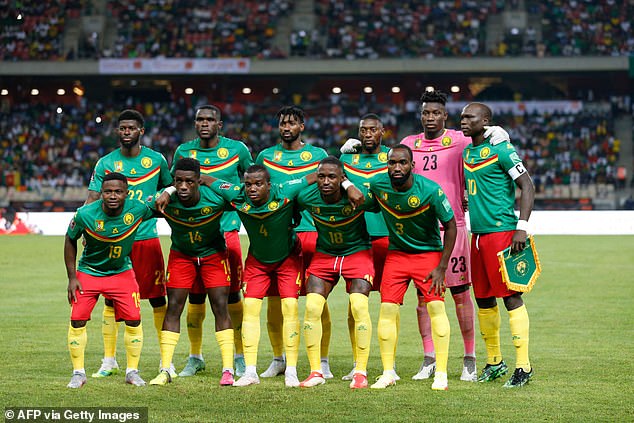 The government of Cameroon, under the long-standing leadership of Paul Biya, who came to power in 1983, is accused of sharpening the divisions between his administration and the rebels ahead of the tournament.

Last week, 47 political opponents of Biya, Africa’s second longest serving leader, were jailed for between one and seven years, according to the US broadcaster, Voice of America.

‘The government is doubling down. It is sticking with its view that only a political response will work but this needs a political solution. The military approach is failing. It needs… a roadmap that shows the way towards peace talks to try to stop the possibility of violence and casualties among civilians and the players.’

But it is not just in the west where security will be tight. 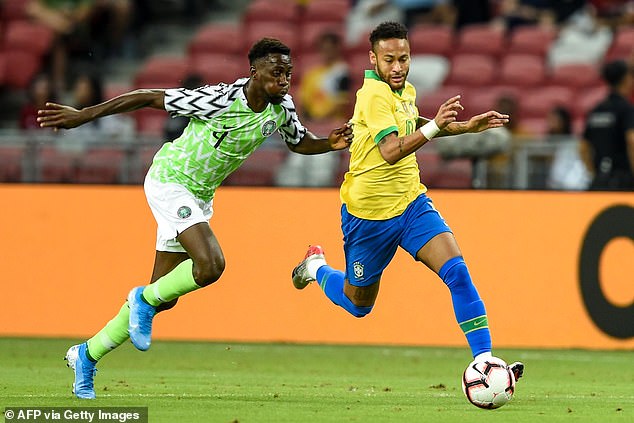 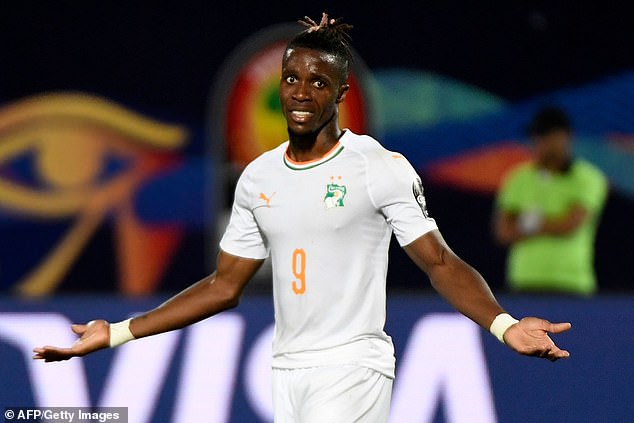 Scores of players from the Premier League will be in Cameroon, including Wilfried Zaha

‘My fear… is that the recent phenomenon of bomb blasts which have been happening in other parts … could be a common phenomenon during this AFCON period,’ local journalist Honore Kuma, told Reuters.

In the north of Cameroon, there is a separate conflict between the Government and terrorist groups Boko Haram and Islamic State West Africa. Both groups aspire to establish Sharia States.

While the UK government has advised against all travel to the far north of the country, the host city of Garoua, is also the subject of a travel warning with visitors advised not to go unless it is essential.

There have also been kidnappings in the region, according to the Foreign Office.