Russians were the most visible travellers heading to Thailand post February 1, 2022, when the Thailand Pass Test & Go option was rebooted. Even with its 2 days of pre-booked SHA+ quarantine and PCR tests, along with US$50,000 Covid insurance (which has since been reduced to $20,000), the Russian travellers were delighted to jump on a plane and take the long trip to the much warmer Land of Smiles.

That situation has now radically changed and the world is reverberating to the full impact of Russia’s aggression and the invasion of Ukraine.

Now there’s a mere trickle of daily flights between Russia and either Suvarnabhumi or Phuket in Thailand. Whilst much of the rest of the world have said ’nyet’ to the arrival of any planes from Russia, Thailand is still allowing them to arrive. But even if the planes are still coming (albeit in vastly reduced numbers), the pressure of world sanctions, bans and the plunge of the Russian Ruble has already made the decision for any potential Russian travellers.

Now, the latest data from ForwardKeys, shows that the Russian invasion of Ukraine, now into its 9th day, has prompted an instant spike in flight cancellations to and from Russia, worldwide. On the day after the first tanks rolled into Ukraine, every booking that was made for travel to Russia was outweighed by six cancellations of existing bookings.

Bookings for March, April and May were already reaching 32% of the pre-Covid levels of travel for outbound Russians. They were heading to Mexico, Seychelles, Eygpt and Maldives. And Thailand.

The outlook for Q3 this year was looking even stronger.

All that Russian travel enthusiasm has now collapsed and, given the harsh economic weapons thrown at Vladimir Putin, his banks, his ‘friends’ and his citizens, any recovery will be a long, long way down the track. Even if there was a swift and unexpected reversal of the Ukraine situation, Russia has already been dealt a fatal economic blow – in just one week the country been turned into a pariah state and much of the rest of the world seems happy to punish the entire country for Putin’s violence.

For countries like the Seychelles, Maldives and Cyprus, Russian arrivals represented a high percentage of their international arrivals. In Thailand that was about 8% of the total tourist mix. And, whilst the Chinese are still in China for at least the rest of this year, the loss of the Russian travel market probably represented an even higher percentage of tourists that won’t be coming to Thailand in 2022. 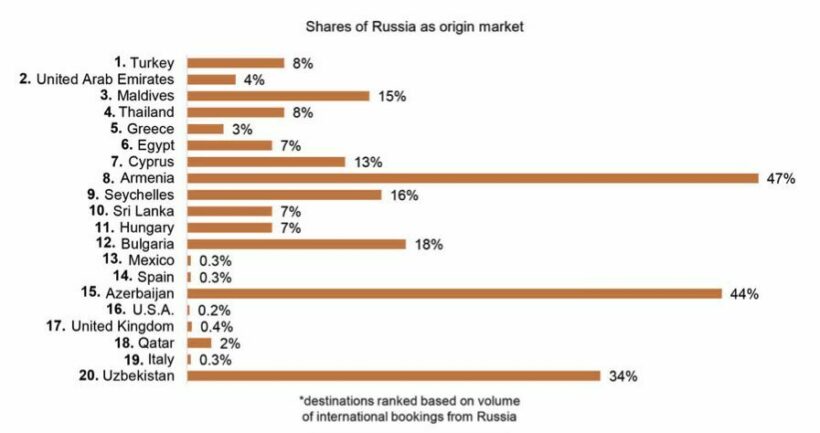 According to ForwardKeys, before Russia invaded Ukraine, the top twenty destinations most booked by Russian travellers in March, April and May were…. Number one, Turkey, then the UAE, the Maldives, Thailand, Greece, Egypt, Cyprus, Armenia, Seychelles, Sri Lanka, Hungary, Bulgaria, Mexico, Spain, Azerbaijan, USA, UK, Qatar, Italy and Uzbekistan.

The world travel industry will be further hit by rising airfares (due to the sharp surge in oil prices), cancellations of routes (across Eastern Europe), a higher resistance to international travel (for perceived safety reasons) and a lingering instability in world politics.

While the Thailand Pass is still seen by many potential travellers as a significant barrier to their choice of Thailand as their next travel destination, and the Russian and Chinese traveller-tap turned off, Thailand’s immediate travel future looks bleak. And this follows nearly 2 years of border closures, false restarts, over-hyped TAT arrival projections and the former Thai tourism workforce heading home to find other work.

The loss of the Russian travellers underscores a critical need for the Thai government to quickly modify the Thailand Pass, or scrap it completely. With so many other factors now making international travel difficult, Thailand will have to rethink their short to medium term tourism strategies to retain its share of the international travel market.

Of course there is no comparison of the humanitarian tragedy underway inside the borders of Ukraine at this time, but Russia’s aggression will likely have much more long-term, and far-reaching, effects than the clear and present danger it poses on the Ukranian nation right now.

Traffic and travel, roadworks and closures for Cambs