Businesses owned by Chinese nationals make an increasingly large contribution to the UK economy. With a combined turnover of more than £60 billion, these businesses now support more than 60,000 jobs across all industries.

Rising personal wealth in China has led to a surge in foreign investment across the world. In this context, Chinese nationals have become ever more keen to put their money to work, wherever opportunity presents itself. While for a long time the developing world has been a key destination for this, Chinese investment has also flowed into the world’s largest economies, including the UK.

Professional services firm Grant Thornton tracks how a number of national demographics impact the UK’s economy. Last year, the firm found that 850 Indian companies recorded a combined £50.8 billion total turnover. Now, the firm has turned its attention to the economic impact of UK-Chinese firms – and found they have an even larger footprint.

Collectively, 845 Chinese-owned companies filed an audited revenue figure in at least one of the last two financial years. In 2020, that was a lower 838. At the same time, these companies have enjoyed an average 5% revenue growth – hitting combined turnover of more than £63 billion. The actual totals may be far higher, though.

Speaking on these findings, Simon Bevan, Head of the China Britain Business Group at Grant Thornton UK, said the Chinese companies in question only represented “a fraction of those doing business in the UK.” In total, Grant Thornton actually identified around 30,000 companies that are part of a China-owned corporate group or are majority held by a Chinese national.

“The average revenue growth of Chinese businesses in the UK remains strong – despite economic headwinds including the Covid-19 pandemic and Brexit – showing that the UK continues to be an attractive place to invest and work. Our tracker finds that Chinese investors are active across a wide swathe of the UK economy, with companies from eight sectors included in this year’s research.” 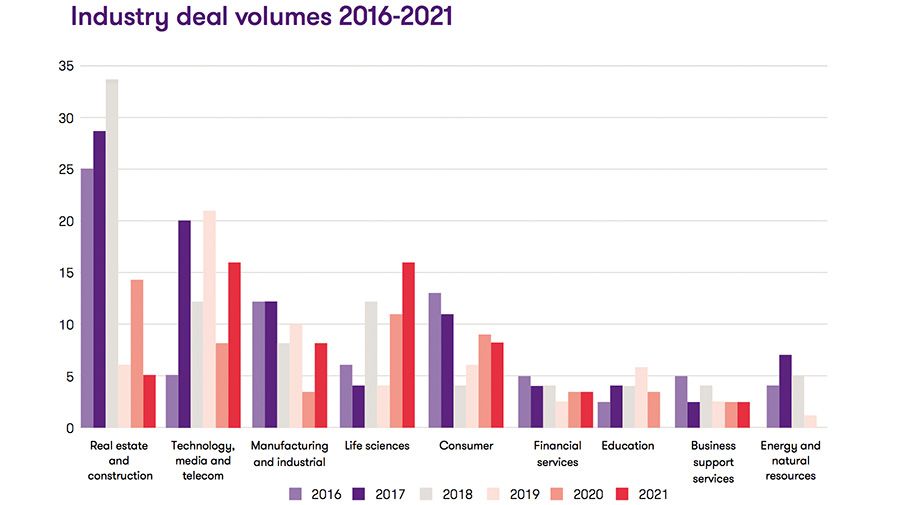 While the UK remains an attractive prospect to Chinese businesses in spite of the pandemic or Brexit, the profile of those businesses has changed. Looking at the industry deal volumes involving Chinese investors over the last five years, it is apparent that some markets have become much more attractive since the pandemic, while others have waned.

Real estate and construction were hives of deal activity in 2016 and 2017. In the first half of 2017 alone, £5 billion in Chinese capital was sunk into the London real estate scene alone, with Brexit’s uncertainty seeing the value of the pound plumet – and investors looking to snap up cut-price properties as a result. Now, however, this demand seems to have fallen off a cliff – even as the economy recovers from the pandemic – because the value of having commercial real estate has fallen in cities where going to the office is increasingly part time. If daily commutes are no longer the norm, property set up to profit from that becomes less attractive.

At the same time, the life sciences sector has seen a boom in popularity. Deal volume in that category now stands at a historic high, with Chinese investors looking to tap into the profitability of the UK’s pharmaceutical scene in the wake of the pandemic. Elsewhere, technology, media and telecom is also seeing resurgent demand. While demand dropped off slightly amid the first year of the crisis, investors are now well aware that the digitalisation of many working relationships means the creation of new communications technology offers large returns.

Chinese companies have created or supported almost 61,000 jobs in the UK, according to Grant Thornton. Of the businesses included in the firm’s study, almost 30% of their employees work in the North West, and 20% in London. As a result, these tended to be where the financially largest businesses were found.

Bevan concluded, “We expect that the UK will remain a key market for Chinese investors, both for those investing for the first time and those with well-established operations in the country. Given its status outside the EU, the style of Chinese investment into the UK may change, as companies make sure they retain a foothold in the EU, but the UK will still likely form an important part of their European strategy.”