The inclusion on the list of Dr. Levine, 64, who is the nation’s first openly transgender federal official to be confirmed by the Senate, sparked outrage from some critics including Owens.

‘Whats a woman? I’m confused. I don’t know what a woman is anymore. It is funny and pointedly ridiculous. It gets back to what I always say about progressives which is that they’re always so progressive that they actually just regressive, right? Owens began in a lengthy diatribe on Tucker Carlson’s show on Fox News on Tuesday night.

‘It’s the same with feminism,’ Owens went on. ‘With early feminism, we were trying to create a space for women that was separate from men. We wanted women sports and for them to compete differently.

‘We have women that train all the way from the time that they’re kids up through college to try to compete against other women. Now you can throw on a wig and say ‘Actually, I am a woman too’ and you can crush all of their records because it is so progressive it is actually regressive!” 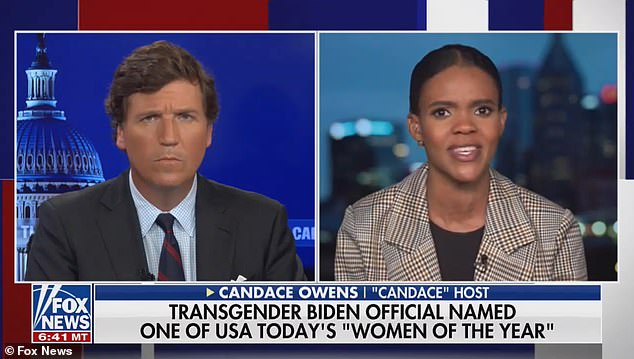 Levine, see far left, was among several women who have been nominated ‘Women of the Year’ 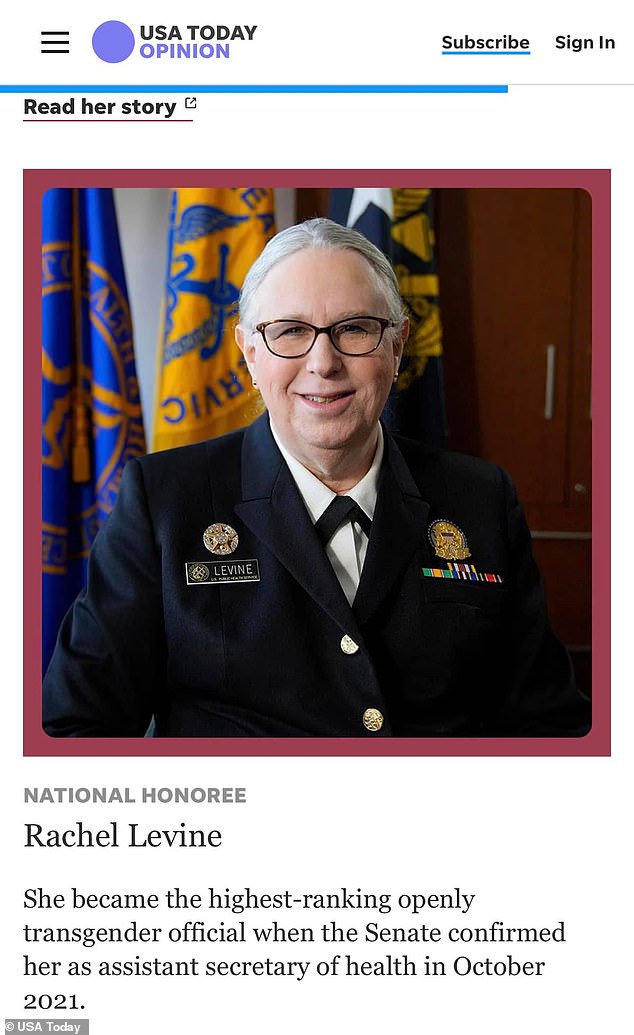 Dr. Levine’s nomination was published in USA Today over the weekend

Owens appeared to be referring to UPenn swimmer Lia Thomas, who has smashed multiple national records since transitioning from male to female, and competing in the pool as the latter.

Her success has sparked a fierce debate over whether it is fair for trans women to compete in some sports, even after hormone therapy, and could ultimately see the rules on swimming changed.

USA Today made the announcement of Levine’s nomination on Sunday.

‘Rachel Levine is one of USA Today’s Women of the Year, a recognition of women across the country who have made a significant impact,’

Other nominees included Vice President Kamala Harris and Melinda Gates, the former wife of Microsoft founder Bill Gates. But it was Levine’s inclusion as someone who is transgender which irked Owens.

‘We are actually erasing women and sadly, it was a feminist that got behind this early on and didn’t have the courage to say ‘no, that’s a man we are looking at!’ and feminists should be fighting this tooth and nail.’

Owens then called upon other women on both sides of the political spectrum to back up her complaint. 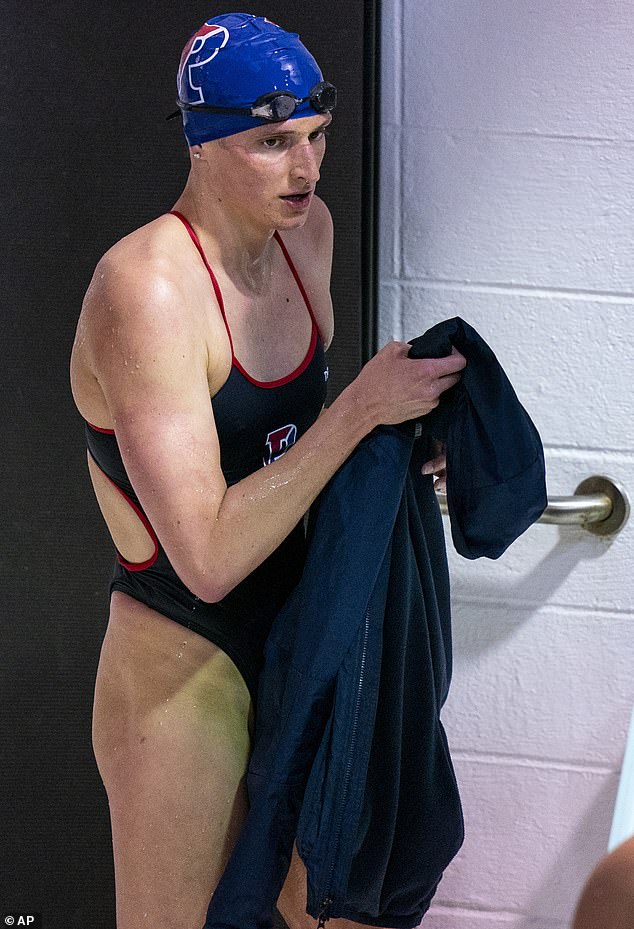 Owens also appeared to take aim at transgender UPenn swimmer Lia Thomas, pictured in January, whose run of record-breaking wins has sparked questions about whether it is fair for trans women to compete in some sports 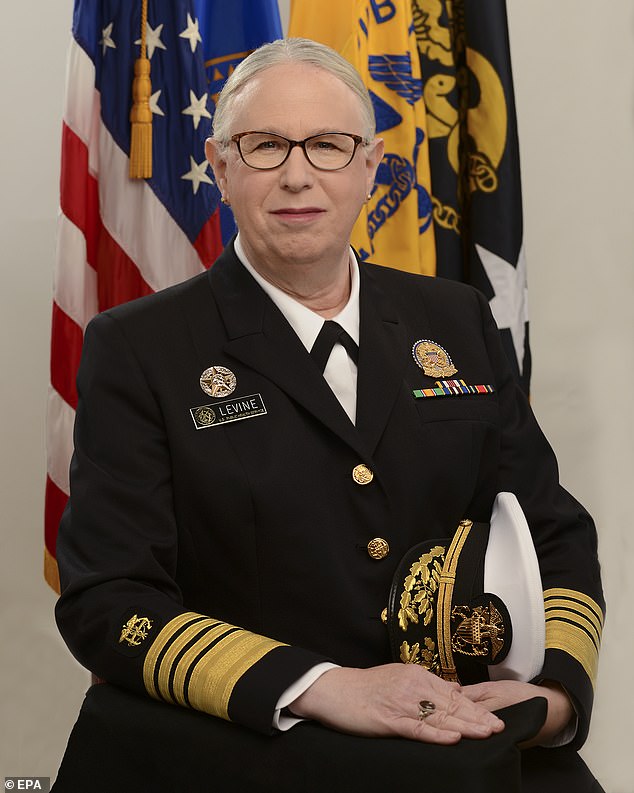 Dr. Rachel Levine is the nation’s first openly transgender federal official to be confirmed by the Senate and was formerly Secretary of Health for Pennsylvania

‘Where is Hillary Clinton? I don’t want her perspective on Russia and Ukraine but I do want her perspective on this category. The person who ran “on oh, my gosh, women are so oppressed and I’m a woman and vote for me because I am a woman.” She seems suspiciously quiet on this topic and doesn’t want to touch this topic about men taking the spots of women. So it is ridiculous.’

Owens seemed to have her own theory as to why Levine has been included in USA Today’s list.

‘It is always about disrupting the family unit. The government gains more power when people are confused. If you know whether you’re a women or a man you’re not going to have a functional nuclear family. Instead you will have a a dysfunctional family. Dysfunctional people tend to rely upon the government. That is what is happening right now and that is what you are seeing the push for.’ 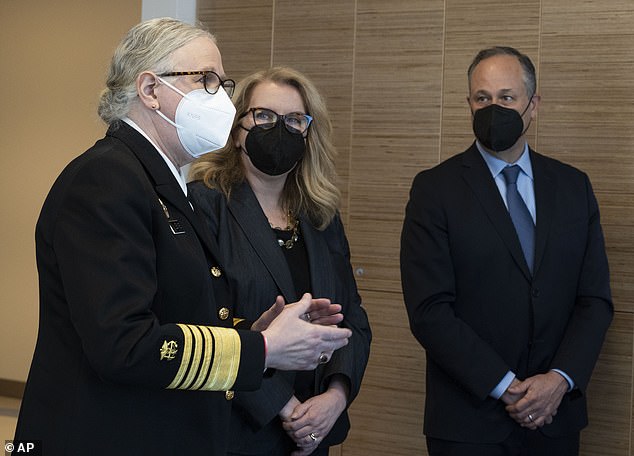 USA Today says their Women of the Year program honors ‘strong and resilient women who have been champions of change across the country, leading and inspiring as they promote and fight for equity, and give others a place to seek help and find hope.’

But Owens wasn’t finished, adamant that a person’s sex was not something that could be chosen at will.

‘You are born the way you are. Of course, we’re talking in reality and the left does not work in reality.’ 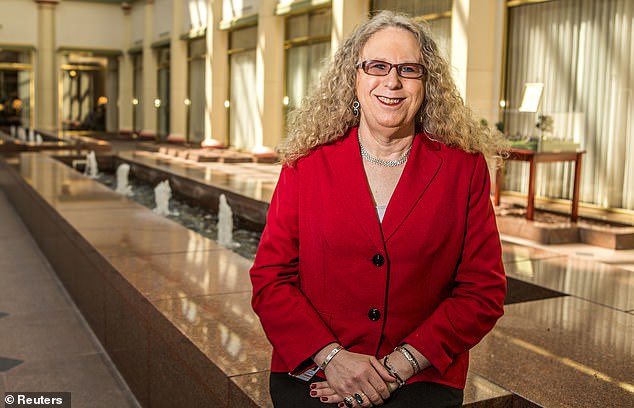 Dr. Rachel Levine is seen at the State Capitol of Pennsylvania, Harrisburg, in May 2015. Levine, a transgender woman taught pediatrics and psychiatry at Penn State College of Medicine, and was appointed physician-general of the State of Pennsylvania

Levine was the Secretary of Health of the state of Pennsylvania from 2017 to 2021 before taking up her role in the Biden Administration.

With the move, the 64-year-old became the first openly transgender four-star officer in the Uniformed Services and the first female four-star admiral.

Levine has often been the subject of transphobic comments which she has learned to handle with tact.

‘Your actions perpetuate a spirit of intolerance and discrimination against LGBTQ individuals and specifically transgender individuals,’ Levine said last year before a scheduled press conference.

‘I have no room in my heart for hatred and frankly I do not have time for intolerance.’