ANTHONY JOSHUA is close to splitting from Sky Sports and signing a mega-money deal with streaming app DAZN.

The 32-year-old former heavyweight world champ has been with the broadcasters for all of his professional career.

But that contract expired after the September defeat to 35-year-old Ukraine genius Oleksandr Usyk in September.

SunSport understands he has been the subject of a bidding war since.

In 2021, London-based DAZN poached Matchroom promoter Eddie Hearn away from Sky with a £100 million warchest.

But Joshua’s UK rights were not part of that package. 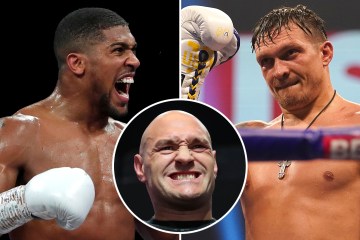 However, DAZN do show him elsewhere around the world.

But Sky appeared on course to re-sign with the household name.

Watford’s AJ signed a life-long deal with Matchroom one week before the points loss of his WBA, IBF and WBO titles against Usyk last year.

And the rematch targeted for August in Saudi Arabia will be his first of his next potential contract.

Defeat for Joshua will significantly harm his brand and reputation and drop him well out of the world title.

But a comeback victory will make him once again one of the biggest names in global sport and be a huge coup for DAZN.

Sky Sports were frontrunners to secure his signature again up until a couple of weeks ago when DAZN felt the race was lost.

But a sudden swing has now put the Len Blavatnik-owned app in the driving seat and an announcement could come as early as next week.