Sue Barker has bid an emotional farewell to Wimbledon following her final stint presenting the BBC‘s coverage, with the legendary broadcaster reduced to tears after being surprised by a touching tribute video featuring a host of sports stars.

The likes of Andy Murray, Roger Federer, Rafael Nadal and Billie Jean King all lauded the 66-year-old, while elsewhere in the sporting world, Michael Johnson and Robin Cousins thanked her for her decades of stellar service on the television.

Barker is hanging up her microphone after 30 years of fronting the tournament.

Commentator and former Wimbledon champion John McEnroe caught her off guard live on air, and introduced a package of her highlights as a player and presenter.

Recording a brief video, Federer said: ‘Thank you for everything you’ve done for the game of tennis. Interviews, on court… you made me cry. I wish you the very best for the future and, again, thank you for those incredible 30 years.’ 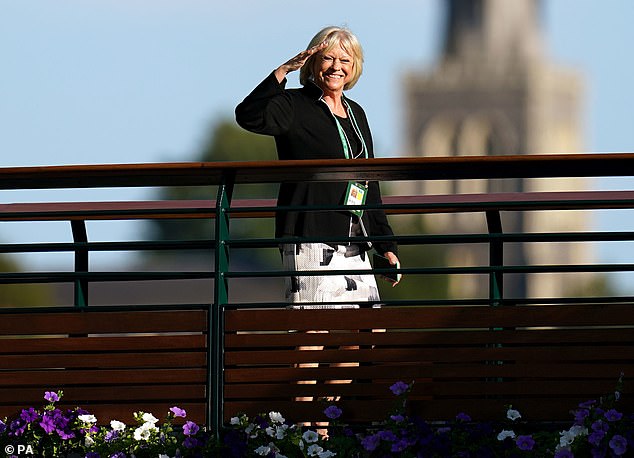 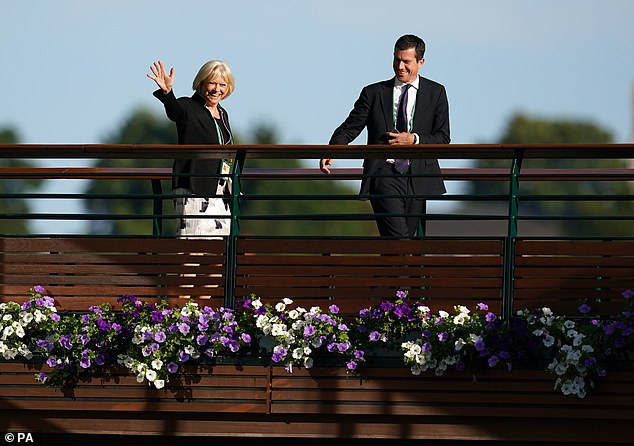 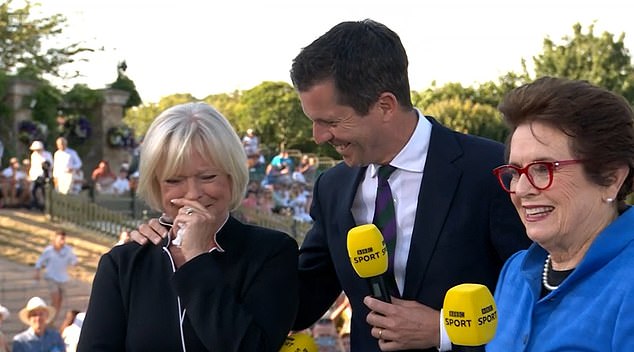 Murray, meanwhile, said: ‘I’ve grown up watching you on the TV, and then obviously been interviewed by you here many times. You’re going to be sadly missed by everyone who loves and watches tennis.’

There was also a glowing moment from Nadal, who added: ‘Thank you for all the great things that you did over all these years.

‘We will miss you, and we wish you all the very best for the future.’ 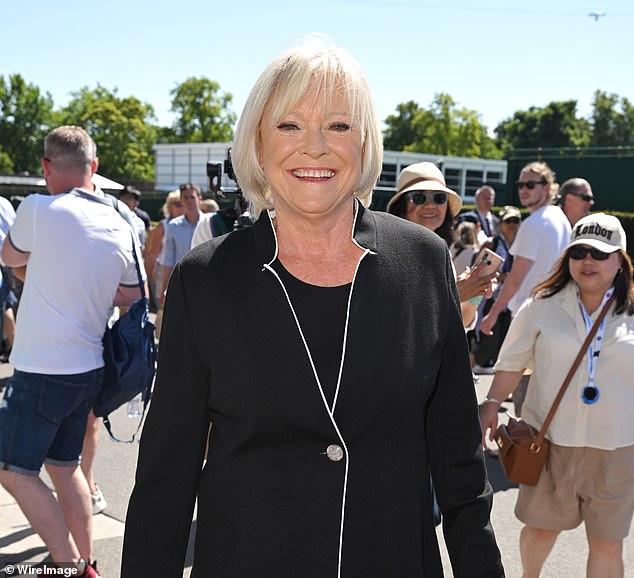 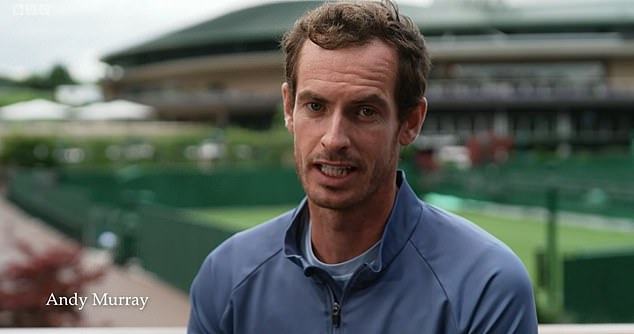 There were further tributes from Tim Henman, Pete Sampras, Chris Evert and Martina Navratilova among others, all of whom wished Barker well in her retirement.

An emotional Barker, reacting to the video, said: ‘It’s been an absolute privilege. I’ve loved it, 30 amazing years.

‘I’ll miss the job and most of all the people I work with. I’ve been so proud to front the programme so thank you.’

A crowd had gathered to watch the video, with Barker reduced to tears. While the BBC panel waxed lyrical about her, the spectators chanted, ‘We love you Sue, we do.’ 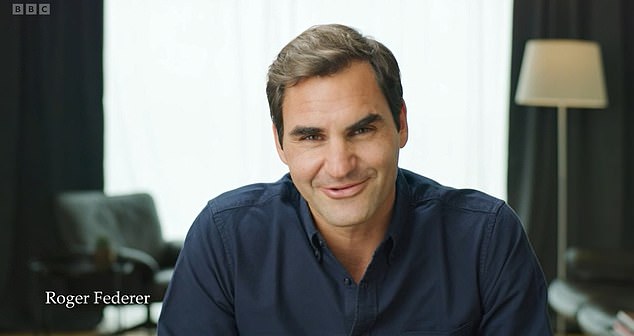 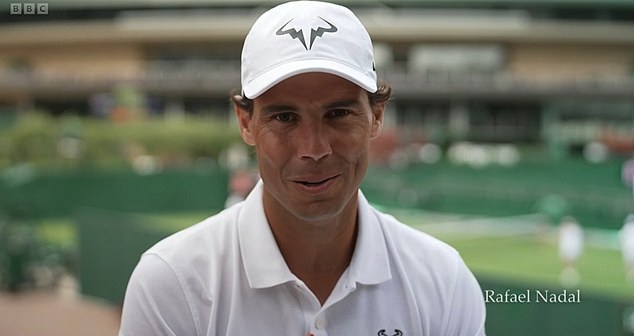 Rafael Nadal featured, too, with the veteran wishing her all the ‘very best’ in her retirement

‘In front of the camera, behind the camera, you’ve just been absolutely amazing. I’ve been so proud to the front the programme, so thank you.’

Earlier today, McEnroe went off script to thank Barker for her efforts, shortly before the men’s final between Novak Djokovic and Nick Kyrgios on Centre Court.

McEnroe, a three-time champion at SW19, hugged her before stepping off camera. 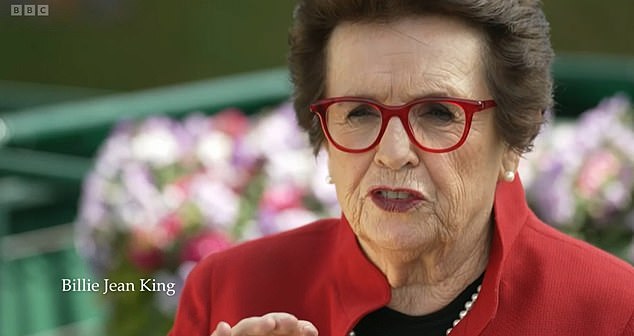 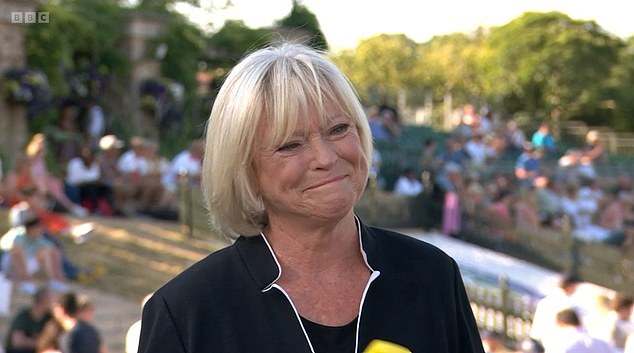 After watching the clips, Barker described her emotions and admitted to a bittersweet feeling

‘Before I go I want to give you one last hug, Sue,’ said McEnroe, before the two embraced.

‘Thank you for everything. You’ve been amazing, unbelievable… we are going to miss you.

‘If you want [an] absolutely big time [comparison], you’re the Roger Federer of the broadcasting world.’ 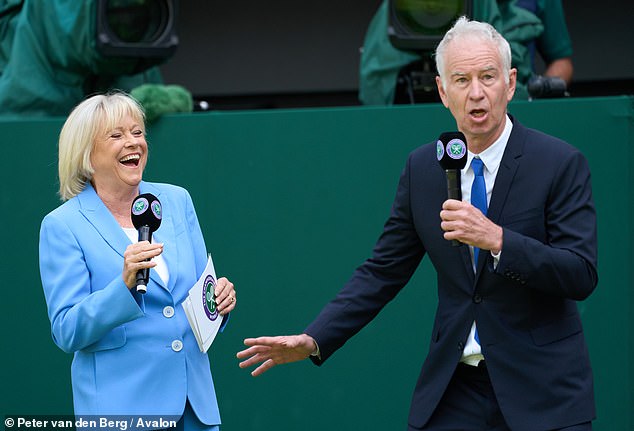 Going off script earlier on Sunday, John McEnroe (R) hugged Barker and paid tribute to her

Barker blushed, before replying: ‘Thank you so much!’

Sportsmail exclusively revealed in June that Barker had been offered a three-year contract extension by the BBC.

But she vowed to bow out on top and won’t be seen on screens after today’s final.