‘I travel the world with my three cats on my shoulder’


Captain Leah Williamson said her England side have “changed the game in this country” as she celebrated their historic Euro 2022 victory.

They lifted the trophy and sang Sweet Caroline in front of thousands of fans at Trafalgar Square on Monday.

“We said we wanted to make our legacy about winning and that’s what we did,” Williamson said.

“The legacy of the tournament was already made before that final game – what we’ve done for women and young girls who can look up and aspire to be us.

“I think England have hosted an incredible tournament and we’ve changed the game in this country – and hopefully across Europe and across the world.”

The Football Association is now set to hold talks with manager Sarina Wiegman about extending her contract with England after Sunday’s success.

Dutchwoman Wiegman, whose deal with England currently runs until 2025, has now won back-to-back European Women’s Championships, after guiding the Netherlands to the title in 2017.

“She will have a couple of weeks off. When she gets back, we’ll have a conversation,” said Baroness Sue Campbell, the FA’s head of women’s football.

On the legacy of England’s Euro 2022 triumph, FA chair Debbie Hewitt said: “We’ve got to get girls across the country playing football in schools.

“Once they have that opportunity, all of them, to play in schools and associate them with the clubs, then you will see this just take off. It will be like rocket fuel, the impact of the win.”

Hewitt said the Premier League could play its part in supporting the legacy of Euro 2022 by continuing to invest in the women’s game.

She said: “We had over 17 million viewers last night watching this game in this country. If you are the Premier League. Why wouldn’t you want to capitalise on that?”

“We want it to be that people come in to watch, and with sellout crowds in this country and all over the world, so hopefully we’ve played a big part in that and hopefully we can continue to grow it,” Kirby said.

Ella Toone, who scored England’s first goal in the final, added: “That’s what we set out to do in this tournament – make the nation proud, fight for women and get young girls involved as well and I think we’ve done that for every single woman in this world.”

‘There’ll be expectation but we have an amazing squad’

With less than a year until the women’s World Cup in Australia and New Zealand, expectations will be high for the new European champions.

“I think we should take time to reflect on this one first, enjoy this one before we start thinking about that [World Cup],” said Kirby.

Defender Lucy Bronze said she was keen for the England team to get a star on their badge, which comes with a World Cup victory.

She said: “The Euros is fantastic, especially in our home country, but there’s a little star missing from our crest at the minute on the England shirt. That’s definitely a mission of ours to get that star there.”

Germany have an incredible record in the European Women’s Championship, winning it eight times in total, most recently in 2013. 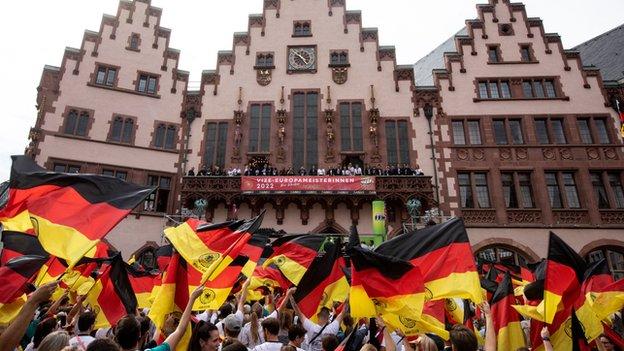 Glory Hunters lifts lid on the world of sports memorabilia